Henry was born in San Francisco in 1915. Margaret was born in Sebastopol in 1930. Their grandfather was a member of the samurai class and a professor in a Japanese agricultural college. He allowed their father to go to California to study, but recalled him to Japan to marry their mother, a school teacher. He required the young couple to leave their first son in Japan when they made another trip to the United States, to ensure that his only son and heir would eventually return. But Henry and Margaret’s parents decided to stay in California.

The family lived in various parts of Sonoma County before settling down in Sebastopol with an apple dryer and an orchard of their own. Their mother taught in the Japanese cultural school here. Their boys (Henry, Ed, Frank, and Pete) went to Analy High School and the Santa Rosa Junior College. Margaret attended Sebastopol Elementary (now called Parkside). Henry went to the University of California at Berkeley and then worked in New York in engineering. He and Ed were drafted before Pearl Harbor. The rest of the family was interned in Amache, Colorado. Frank and Pete enlisted from the camp.

Henry remained in Japan with the occupying forces after the war. He worked for the Armed Signal Corps there before transferring to the permanent Civil Service in Washington D.C. He has retired to Oakmont with his wife, Jeanne.

Margaret returned with her parents to attend Analy, Santa Rosa Junior College and Heald Business School. She and her husband James live in Santa Rosa. She works as a teacher’s aide in Forestville and is very active in the JACL and other community organizations. 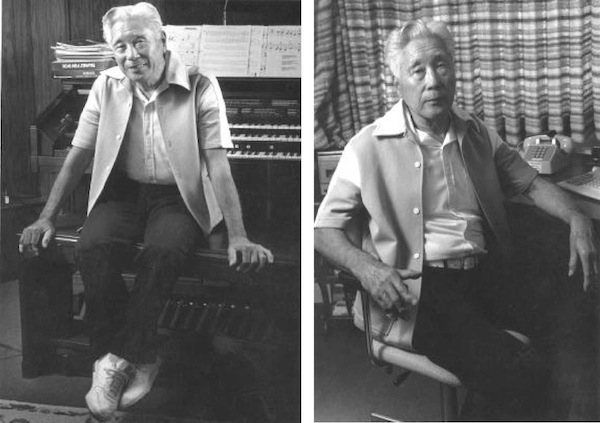 Anybody that lives a long time in this life, they’re all survivors, aren’t they?

World War II really became my life. Whether for good or bad, I don’t know, but it certainly changed what I was planning to do. You know, people can change. In the matter of a few minutes, even.

My mother used to say “Kamisama” – “God” in Japanese—“puts you here so you’re certainly capable to do something.” And you do it – not because you want to get thanked by somebody or somebody appreciates it. You do it because it’s your duty.

I feel you can bring part of prejudice on yourself, because you don’t know the other people. You have to do your part. You just can’t wait for them to invite you.

But there is something else. When I got drafted and I was in South Carolina, a Jewish fellow from Brooklyn and I sat in the back of a bus. The bus driver stopped and said, “Hey, fellas, you’re in the wrong place! That’s for the black people‘ – no, he said “That’s for the Negroes.” I couldn’t believe it. In a situation like that, I could understand how the black fellows felt. 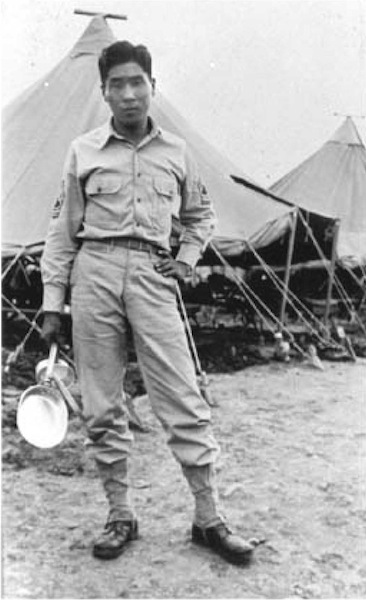 “After several background investigations, this soldier is no longer considered potentially subversive.”

Visiting the camp was really something! Here I’m going in with a uniform and the living quarters were worse than our barracks. I’ve got to thank General Dewitt that I was able to go. We were fighting Rommel in North Africa and every division scheduled to go to Europe had to come out here for desert training. Dewitt ruled that any Japanese American soldiers could not be out here in the Western Defense Command. There were sixteen of us in the 8th division and out of a clear blue sky they said “Well, you’re transferred out.”

My acceptance to Officers’ Candidate School had been canceled when Pearl Harbor hit. But later they said, “You’re going to OCS.” The Tac’ officer told me that I was there on a “trial basis”. “I notice you have a degree in engineering. That doesn’t mean a thing. Twenty-eight years old hmmm? You’ve got to show me you’re physically fit.” I guess the first time we ran the obstacle course I tied the school record. So he came over and said, “Well, you’re doing all right I guess!”… When we got our commissions, he shook my hand and said, “You really showed me up!” 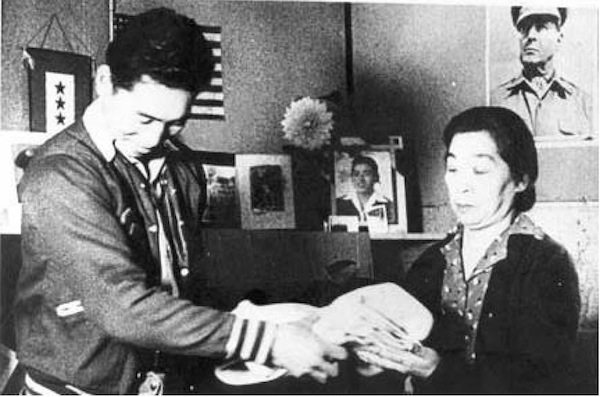 Whatever was asked, they gave. They felt, “This is part of being in this country.”

My brother that got killed [Pete] saw them come right out to the orchard and drag [our neighbor] Mr. Akutagawa. Poor man, they’d just had a baby. The FBI agents wouldn’t let him go inside the house.

Pete took him a change of clothes over to the court house and heard some agents talking. When he got home from the JC he said, “Is Pa here? Did the FBI come?” My mother said, “They came all right, but I really told them!” She had pictures of Hank and my other brother, Butch, in uniform. She looked at them and said, “My husband hasn’t done anything! And I’ve got two boys in the army!” I guess they smiled and said, “We didn’t come for your husband.” And the n they searched the house.

We had already turned in our radios and shotgun at City Hall. I don’t remember a search warrant or anything. They found two shotgun shells and pictures of Pete had taken at a dam in Utah [where his friend’s father was an engineer]. They said, “We need these.” I don’t think my parents had any idea of being evacuated. They were numb and these things were happening to them. 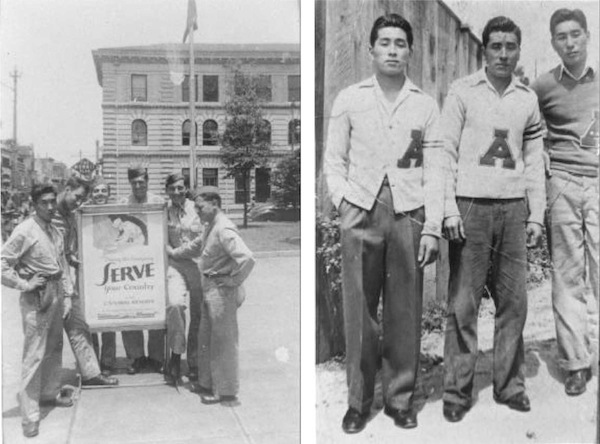 I went back [to Fort Jackson after visiting my family] and was told, “Gee, we shouldn’t have given you a pass!” Our unit didn’t get the word that all Japanese Americans in the military were supposed to be grounded. But at that time [my parents] assured me that everything was normal. They weren’t worried.

My parents had to make some rough decisions. My mother felt she couldn’t leave her first child over there [in Japan] but they lived through that. She said, “This is your country and I would think you want to stay here.” So that’s what we did.

[After the war] my dad was asked by the War Relocation if he would come talk to people about Japanese Americans coming back. An FBI agent and the Chief of Police, a good friend, went with him. The business people in Sebastopol already had a list of what families they didn’t want back. They told my dad, “You can come back, your boys were fighting for your country. These are the families we don’t want” but he said, “How can I tell them not to come back?” Three fellows went out with a shotgun and told this family “We want you out in 48 hours”. My dad called the Chief of Police. But they were so frightened they asked us to move in with them. 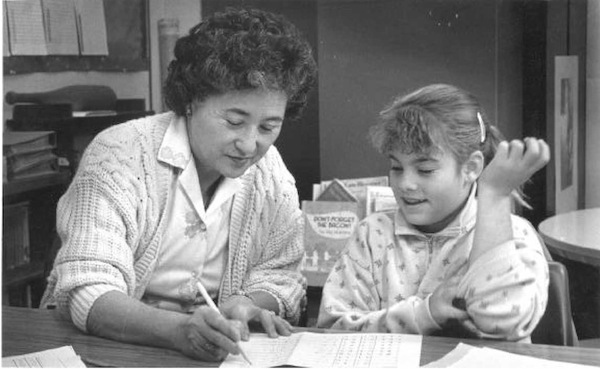 You don’t forget these things.

As I get older I’m getting to look more like my mother! My mother was good at teaching us… When I was raising our two children I was telling them the same things my mother used to tell me. Then when my son was nineteen or twenty, he was repeating the same things I had. I thought “Oh my gosh, that’s my mother talking! Coming through my son!”

I feel very comfortable when teachers ask me to share [about the internment]. The more people you educate, the better. There was one fourth grader who stayed in all during recess. He just kept shaking his head, “That’s wrong! How could our government put you and your family in camp and keep you there when you had all your brothers in the Service?” I give that teacher a lot of credit.

There was a black lady who came to school and thanked me. After her daughter came home and talked about [what I had shared], she could start talking. Her daughter said, “If you’re black, how come you’re not black?” You don’t look black!” So she told about her great grandmother who was a slave. She said that was the first opportunity she’d had. And I thought, how neat! That I was able to help somebody else share their background! 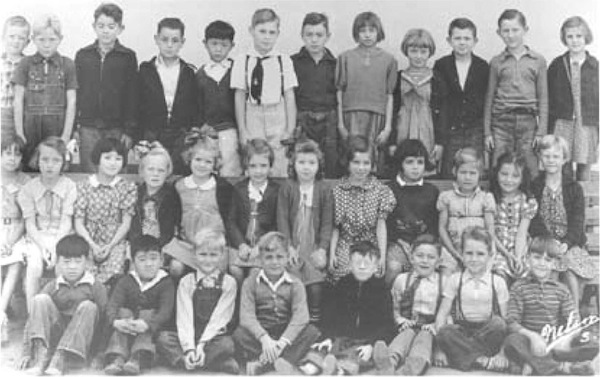 They were just as scared as we were.

This kind of hurt: there were Chinese friends I had grown up with. And the next day [after Pearl Harbor] they have these big signs saying “I am Chinese”. But I can understand now; they didn’t want to be identified as Japanese.

While I was in camp I had a couple of friends I was writing to, and all of the sudden they stopped. When I came they told me, “You know, there was someone in the Post Office watching who was getting mail from camp. So my parents felt I should not do this.” One friend still has my letters. One day she said, “Did you know they were censored?” I mean, an 11 and 12 year old child? What can they censor?

When we got back, I was one of the fortunate ones. I had a good friend who really helped. Her father was the doctor that brought me into this world. The first day I was supposed to start Analy, I really dreaded it. I thought, “Oh gosh, what’s going to happen?” My friend said, “You come over to my house first and you’ll go with me.” And there were about six other kids waiting and they all walked with me. So that was really nice. I was the only Asian there, I was the first one to go back; it was a funny feeling. But when I saw them it was fine.