Paul was born in the city of Cluj in 1929, a major business and educational center in Transylvania, which was then a western province of Romania. His father was an economist for a shoe and leather factory and his mother was a dress designer. After Paul’s first years of schooling, Transylvania became part of Hungary. Growing up, he learned to deal with uncertain rules, languages, and bureaucracies in this precarious political situation.

The family was deported with the rest of Hungary’s Jews in the spring of 1944. They went from a work camp in Cluj through Budapest to a place of detention in northwestern Hungary, where they were taken by the SS to Auschwitz. His mother died there. He and his father were transported to various labor camps after that. His father died in Dachau in 1945.

Paul’s group was lined up to be shot on a riverbank in Bavaria when the SS guards heard the sound of American gunfire coming closer and ran away. The abandoned prisoners went to meet the American troops and wound up in a displaced persons camp. Paul served as interpreter there, continuing in this job when it became a war criminals camp, until he met an American couple in the USO named Ben and Jane Rochelle. They sponsored him for immigration to the United States and he was able to contact an aunt in New York upon arrival. He is otherwise the sole surviving member of his family.

Paul went to American schools and eventually received his PhD in Biochemistry, working in government and industry in related fields. He has been teaching at Sonoma State University since 1970. He lives in Santa Rosa with his wife, Sandy, his daughter, Eleanor, and three cats and a dog. He has a grown son, Peter, who lives in Berkeley.

Sadly, since this original exhibit, Paul died of a stroke in November of 1998.

You don’t know which way the wind would blow the next day.

In a small country people are very much aware of world events because their livelihood depends on it. A grocer, for example, has to buy goods from France, from Germany. The value of his money changes daily. They open a newspaper back to front, to look at the quotations of the currency. And the houses are crowded.

As I grew up, I learned there were some things you didn’t discuss with strangers. Informing on each other is an old European game; it wasn’t invented by Hitler. If people made some anti-government remark, they were not run out of town – that’s an Old West concept. They were tracked, marked; no matter where they went someone was watching them. You became aware of this. You could be arrested without an identity card if you were seven years old!

I was treated with dignity and courtesy by American immigration officers… But I was very shocked that Americans didn’t speak foreign languages, since so many Americans travel throughout the world. And I was surprised that children had a great deal more liberty, both personally and as a group.

Excellence was not super achievement, but that you do it just right. It was a grinding down to the robot, the automation. The Hungarian word szabadsag, which people translate as “freedom”, is really “independence”, meaning not to be dominated by Austrians! It does not mean that you are free to be what you can be, and civil rights do not exist per se.

We harbored fugitives at our house – they were writers and poets. In this country, you don’t think of a writer as someone who would be persecuted. The writers I

knew were all political; they addressed the great ideas of mankind, which threatened the existing order.

My mother was arrested at my birthday party, and held for six months, because she had organized an orphanage. They thought this a vile, Communist act.

Dr. Janos Karl, the principal of my school, had extraordinary courage. At graduation exercises in 1943, with all the military commanders attending, he spoke about the principles of Christianity ad the principles of other symbols – looking right at the German flag! It was a speech that should be recorded in marble. He was playing with his life.

“I intend, gradually, for my daughter to learn her family history.”

If you’re a child, you have the advantage of not projecting to the future. Adults think of what happens next Monday, next Thursday. Children live for now and that kind of satisfaction. That’s not what we train them for but it’s important that projected consequences don’t suppress your will to live. And there is a very, very real will to live.

Eleanor learned about the war quite inadvertently. She has two grandparents who live here – my wife

was born in San Francisco. One day it dawned, “where’s the other set?” So I told

her they were killed in the war. She now has some notion, at least, that the conflicts we term “war” result in a lot of innocent people being killed who are not fighting.

I try not to use labels like “Germans”. I explain to her what the Nazis believed, and the ridiculous nature of this whole notion of superiority and inferiority, what it can lead to. I tell her about American Indians and others who were oppressed and persecuted. In such ways that she does not feel that the entire world is involved in a daily pursuit of how to kill another one. 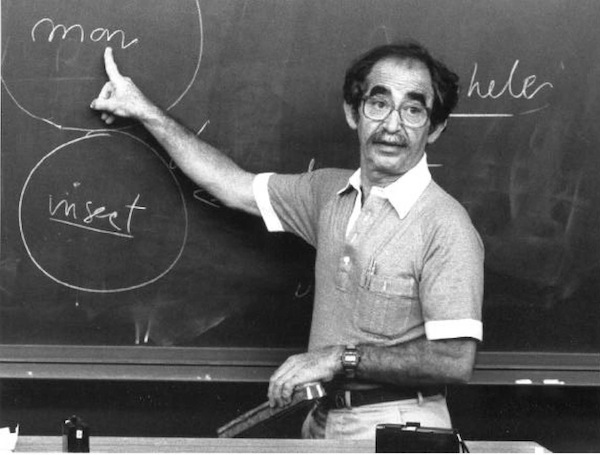 My parents valued human dignity and the richness of the human soul above all else. They taught me to enjoy things in life without possessing them. They convinced me that there is really a great deal in the world which is strong and positive and sustaining. And they taught me that sometimes you have to shut down your hearing towards the negative signals, to maintain yourself on a course. That doesn’t mean you should be naive or blind. But you don’t confuse the more important and the less important.

There is an absolute need for love and affection that is genuine and satisfying and nurturing. It’s not just something that philosophers argue about.

What you do, how you live your life, matters a great deal. It is not a trivial thing. If you tolerate discrimination, if you tolerate injustice – if you participate in it – eventually you discover that this is destructive. And the notions of justice which were introduced by the great religions are very, very practical ways of making a livable world and a peaceful society.

It has always been that way, throughout history.