Thay was born in the northwestern section of Cambodia in 1934, in a small town in the province of Battambang. His parents were rice farmers. His mother died when he was three. When he was 7, his father sent him to live with monks in a pagoda in the city of Battambang. The provinces of Battambang and Siem Riep were then under Thai rule, so Thay’s early schooling was under the Thai system (modeled after the British). He and his brother (who had become a monk) then studied in Bangkok. He returned to Battambang as a young teenager.

After World War II, Battambang again belonged to Cambodia, and Thay began to study Khmer and French. When he finished high school he went to Phnom Penh and found a job in the Ministry of Agriculture helping farmers learn to select strains of corn. He passed an exam that allowed him to be in an elite group of students who became Cambodia’s first trained television broadcasting personnel. He met his wife there. He dealt with foreign embassies, procuring foreign films for broadcasting.

When the Khmer Rouge rose to power, he was driven into the countryside with the rest of the inhabitants of Phnom Penh. His family was moved around to plant rice in different locations, experiencing and witnessing terrible hardship. At one point he planned and executed a daring mission, leading twelve teenagers in broad daylight to steal vegetables for their work group. He eventually left for Thailand during the Vietnamese invasion. He and his wife came to the United States in 1981, and have been living in Santa Rosa since their arrival. Their children are Sopheap (21), Sophear (19), Makara (18), Vichheka (13), and Aknouklo (9). Sopheap and Sophear are participants in the Survivor Project. 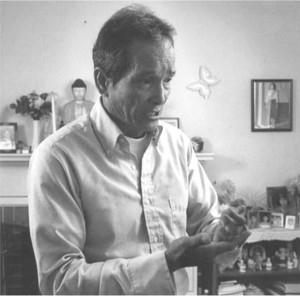 I didn’t plan at first, I just waited, listened. And saw.

On April 17th [when the Khmer Rouge entered Phnom Penh], at first I didn’t know what would happen. I listened to the radio and heard an announcement of meeting in the radio station. The Khmer Rouge troops were saying, “Everything’s okay, Mom, Dad! Stay quiet, don’t worry, we are coming! Everything’s peace now. Everybody in

the city has to be proud of the Khmer Rouge coming now! Now our country is at Peace! And free!” Free from what? They didn’t free me from the killing, from the giant that was eating us!

The first part of the broadcast they said, “Oh, hello, I’m happy! Now we’re at peace. Brother, sister cousin!” Everybody wore the white flag, you know? But two hours later, and now in the radio, “Stop the broadcast!” They changed their minds!

I thought, “Oh, another group will come, another group.” But who? That was the question mark in my mind. And I had to pick. I didn’t want to leave my house! How was I going to get food? How, where would I stay? Stay in the middle of the sky, like that? Or under a tree? I was responsible for a lot of people. 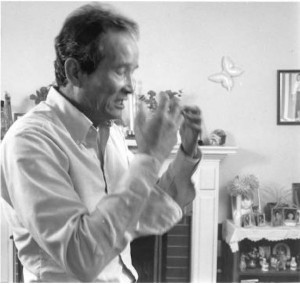 Everybody tried to take care of their own.

My mother in law and my father in law had become crazy. Sometimes they cried, sometimes they smile and laughed. This happened because they often had nothing to eat. I got permission to take them with us because I was a good worker.

They sent us to help do the rice farming in Battambang. We walked two days and two nights.

Then there was a trip by boat. My father in law died during this long trip – he was 71 years old. We didn’t tell anyone he was dead because we were afraid they would throw him in the water. We just covered him until we got off the boat, and buried him then.

Then they brought us to the train to transport us to Battambang. There were no seats on the train. Some children and old people died on that train. I remember the books and movies I saw about the Second World War, about Hitler and Stalin. I thought they were taking us away to kill us.

“Goodbye, my sad land and my prison.” 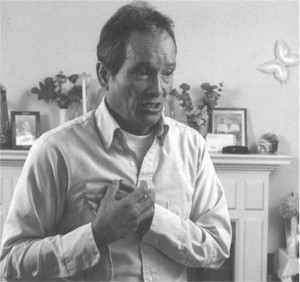 I heard that in the United States they have a problem with people’s color. And I didn’t know how to speak a word of English. I saw the roofs and pagodas from the plane and I thought, “Goodbye, my land, goodbye…” When I got to Santa Rosa, I tried to go places by myself but I didn’t even know how to get on the bus. People said, “Oh Chinese!

Chinese!” And they broke my window.

I wanted to tell them I wasn’t Chinese but I didn’t have the words. I wanted to say how hard it is, what if it was you instead of me? I decided I had to learn. I got a French-English dictionary. I went to the library.

Before I leave the world I have to give things to my children. In my own country I’d give them my house. So I thought, “Education”. It’s a fortune – you can search and bring and build your own future by education. My children will become citizens and they will vote. They know not all politics are crazy. But maybe a crazy leader will want to lead Florida to freedom from the United States! It could happen…I told my children that some leaders are like actors who can’t come back to themselves after the play is over. They’re two people in one body. 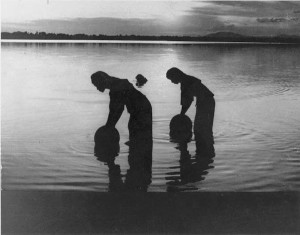 “Goodbye, my sad land and my prison.”

I heard that in the United States they have a problem with people’s color. And I didn’t know how to speak a word of English. I saw the roofs and pagodas from the plane and I thought, “Goodbye, my land, goodbye…” When I got to Santa Rosa, I tried to go places by myself but I didn’t even know how to get on the bus. People said, “Oh Chinese!

Pretend you don’t understand anything at all.

I made “la Femme Cambodinne”, a documentary film, which helped me a lot later during the Pol Pot time, because it was like propaganda. It showed that Cambodian women knew how to ride tractors, to plow the farm, how to plant rice. And everyone wore black, like the country farmers. My wife was in this film.

I had read Mao’s red book, and Time Magazine, and Paris-Match. So I knew about the Communist system. Whenever they win a war, they have to go to the cities and occupy the offices of information. I tried to explain to people, “they do everything in groups. They work on a farm and study on the farm, about the rule of the Communists, during break time. But now I am just telling you about their system. First they have to kill the soldiers, the ministers, the heads of businesses.”

Everyone waited around to hear from the Khmer Rouge. They had stopped all radio broadcasts. Then I saw on a black chalkboard – they were hanging on trees, in the village, on the freeways – that all officers had to go back to the city. “The government will bring you to discuss our problems.” I said, “Don’t go! How about your children and your wife? When you come back where will you find

They sent my family to a Khmer Rouge village. They said, “City people don’t know how to do anything, they’re all rich.” Now we’d have to live on one can of rice for each family every day and now we’d learn to work.