Listening for a Change

The first was in Cloverdale starting in 2013 and in 2017 Santa Rosa launched a Mobile Interactive Community Museum Kiosk.  Both Kiosks are uploaded with video interviews of community members from a broad range of backgrounds and experiences.  All interviews are conducted by students participating in Listening for a Change’s Neighborhood Listening Project.  All are translated into Spanish or English.  Through simple touch screen instructions, viewers are able to watch short videos of residents thereby beginning to know one another and creating a stronger, more inclusive community fabric.  All interviews have been translated into Spanish or English.

Listening for a Change is founded on the conviction that we are Creating Connections, One Story at a Time and it is imperative that we find meaningful ways to understand the rich and complex cultures among us. 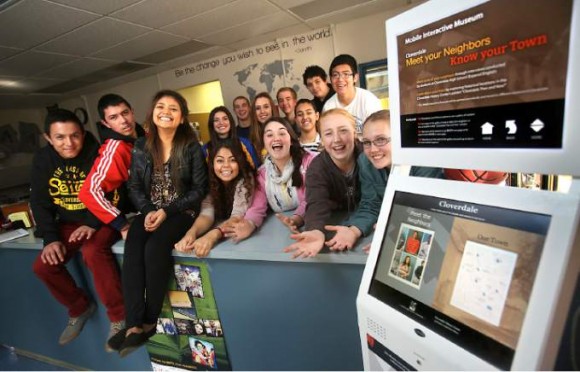 Students from Cloverdale High played a key role in the creation of a traveling kiosk, right, loaded with interviews of Cloverdale residents. (photo by John Burgess/The Press Democrat)

Initially a project of Listening for a Change’s Neighborhood Listening Project and Cloverdale High School, students from Wendy Conner’s classes have conducted numerous video recorded oral history interviews in English and Spanish with a cross-section of Cloverdale neighbors over the last five years.

Through the project the student interviewers, and now visitors to the Mobile Interactive Museum, come to know some of their neighbors as more than passing faces on the street.  By asking such questions as how they faced their biggest challenge, how they spent their time growing up, and what lessons they would share from their experiences students learn to question assumptions about people in their community, develop compassion and tolerance for others, and practice an approach to interpersonal interaction that will support them in all aspects of life.

“It’s an interactive kiosk that tells stories, stories about the history of Sonoma County’s northernmost city and about the lives of people from all walks of life there…Beyond being often fascinating, the interviews displayed by the machine seek to introduce neighbor to neighbor, counteract prejudice and suspicion, and develop a sense of “us-and-them” into one of “we.” — Press Democrat “

“Trained by [Listening for a Change], students have been interviewing Cloverdale residents on video for … years. Teacher Conner said the process has taught students interview skills, built their confidence and opened their eyes to the value of moving beyond presumptions about a person and delving into his or her life.” — Press Democrat 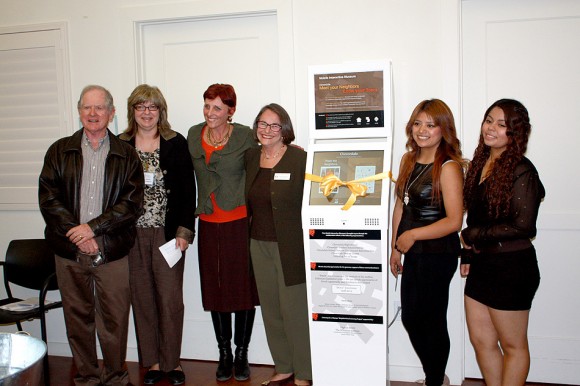 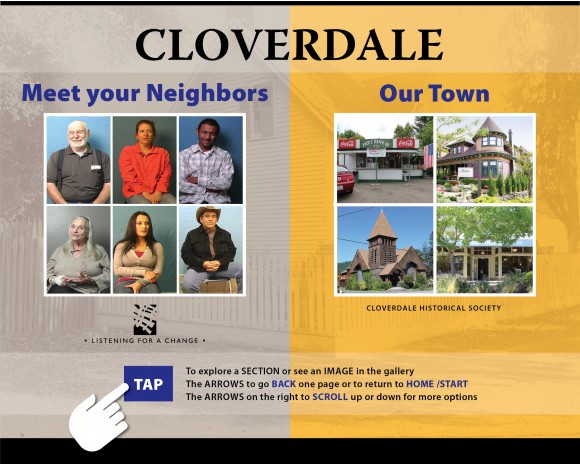 Since it’s launch, the kiosk has spent a few months at Cloverdale High School and the Cloverdale History Center, and moved on to the Cloverdale Library, Anderson Valley Health Center, Cloverdale Citrus Fair, and other public community venues in the town.

“They realize there is so much more to people than you see on the street.” — Wendy Connor, Teacher 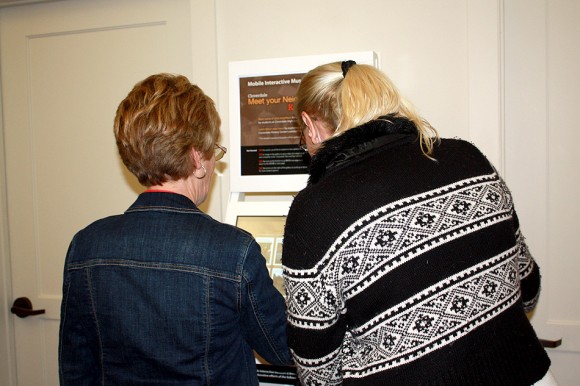 Some Cloverdale locals finding out a bit more about their neighbors!

In the spring of 2013, when John “Dutch” Lyons came to a public presentation of Neighborhood Listening Project video interviews at the Cloverdale Center for Performing Arts, he took out his check book and became the primary donor for purchase and set-up of the Cloverdale Mobile Interactive Museum.  He loved the idea of getting to know people beyond first impressions and he immediately saw the possibilities of using a kiosk to make people’s stories accessible outside of the classroom.

Thanks to the generous support of the Valley of the Moon Children’s Home Foundation, the City of Santa Rosa now has a Mobile Interactive History Museum Kiosk that has been moving around the city.  Venues include a wide variety of public spaces including libraries, health centers, and businesses.  Initially, opening in September of 2017 at the downtown branch of the Santa Rosa Public Library, a special ribbon-cutting community ceremony was held.

Interviews represent schools across Santa Rosa that include:

This Kiosk was Dedicated to the Memory and

Want the kiosk to visit your neighborhood?

Make a suggestion for where the kiosk could be on display.